I love the Bride in any medium, but now that I own a pocket-sized Bride, my life is complete.

In the world of licensed toys, Funko is the juggernaut at the forefront. Every week it seems they’re releasing something new in the Pop!, Fabrikations, or ReAction line, and my wallet is struggling to keep up. I’m amazed at the number of Pop! figures they’ve managed to release, and though I’ve only succumbed twice (thanks to Mrs. Mia Wallace and Hordak), I can totally see why these things are so popular.

The line that has really grabbed my attention is the ReAction line of figures. Being a child of the ’80s and being enchanted by the Kenner Star Wars figures, I was excited to see the Alien ReAction figures from Super7. It’s awesome to be able to have a Star Wars-scale Ripley and Xenomorph to cause havok in the toy box, and Funko has upped the ante with their ReAction offerings. Films like Back to the Future, Terminator, Goonies, and Pulp Fiction are immortalized in retro-style sculpts, and fans are clamoring for more. I’ve picked up the vac-metal Terminator Endoskeleton, and I can’t wait for the Pulp Fiction figures to ship, but when I saw the monsters, I knew I was in trouble.

So let’s look at the horror guys first.

I don’t know what’s better–the card art or the figures. (It’s totally the figures, but those cards are gorgeous!)

Of the seven horror figure offerings, I picked up four: Sam from Trick ‘r’ Treat, Jason Voorhees from Friday the 13th, Michael Myers from Halloween, and Freddy Krueger from A Nightmare on Elm Street. (I didn’t pick up The Crow, Pinhead from Hellraiser, or Ghostface from Scream. Of those, I kinda want Pinhead and Ghostface.) Just like all of the other ReAction figures, these feature retro-style packaging, this time with the movie personas we all know and love. They are all amazingly detailed, at least in the Kenner style, and each features an iconic accessory: Sam’s lollipop, Jason’s machete, Michael’s knife, and Freddy’s fedora.

It’s hard for me to choose my favorite because these are my favorite horror icons, and they’re so well-executed. They’re all really fun for pictures, and the paint detail is incredible. I have a special place in my heart for little Sam, and I’d imagine I’m not the only one. Trick ‘r’ Treat is one of my must-watch films this time of year, and the figure is adorable.

Now, on to the Universal Monsters! 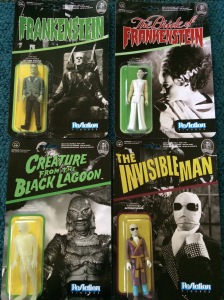 Once again, look at the gorgeous card art!

If you’re a fan of the Universal Monsters, these figures are an affordable way to collect them. Of the eight, I picked up four: Frankenstein’s Monster, the Bride of Frankenstein, the Creature from the Black Lagoon, and the Invisible Man. I didn’t pick up the Mummy, the Wolfman, Dracula, or the Phantom of the Opera. I was lucky enough to snag the variant glow-in-the-dark Creature, which is good, since I’d been on the hunt for a vintage GITD Remco Creature.

All of the figures are the right mix of retro style and detail. Of the four I purchased, of course the Bride is my favorite. I love the split dress leg articulation, her wrapped arms and her electrifying coiffure. That said, the Invisible Man is the most beautiful in terms of paint detail. Those colors are gorgeous, and for all of the different colors, each one is beautifully executed. These are a nice complement to the Remco Universal Monsters figures from my childhood.

I cannot recommend these figures enough. At around $10, they’re at an extremely affordable price point. Well, at least until you buy all of them. That gets expensive. So thanks, Funko, for sending me to the poor house, one Alexander Hamilton at a time.

There you have it–the first Monstrous Monday is in the can, albeit a day late. Tune in later for the first Terrifying Tuesday!