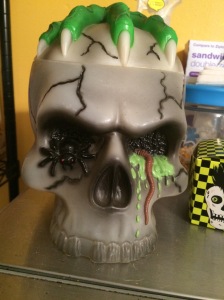 The vintage skull candy container in its natural habitat: on top of the microwave

It’s no secret that I’m a big fan of going to the flea market. It’s often the best part of a Saturday morning. Our flea market seems to be pretty good most of the time–even when we don’t find anything, we see crazy things like people selling tiny livestock, people who have more dogs than teeth, the racist old guy who’s always selling Nazi paraphernalia, or the roving family scooter gang. Not to brag or anything, but I’m pretty good at spotting the awesome stuff at our flea market, just because we’ve been there enough to know where the good stuff is. This little gem is no exception. 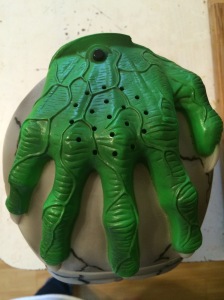 Zombie Hand! (Does it remind anyone else of the character from “Hey! It’s Ernest!”? The one that wanted to be a dentist?)

Normally I walk right past tables that are primarily clothes, but this one had enough random stuff lying around that I thought it was worth a look. I spotted some Halloween decorations, but they were nothing special. That is, until I saw this guy. I picked it up and gave it a once-over, but the person running the table was occupied. I stood there for a second, but it seemed she was going to be busy for a while. I set it down and went about my browsing, but the whole time I was thinking about the skull. Finally, I walked back to the table and asked the price. She said, “$2.” I asked if it worked, and she said she was pretty sure but not 100%, so I offered $1. She took it, and I moved along with my new treasure. When I got home, I popped some batteries in him, and sure enough, it worked! 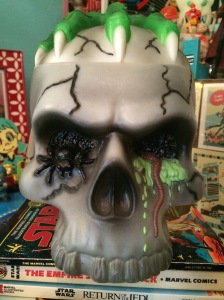 It even looks good on top of your vintage Star Wars comic paperbacks!

It hits all the notes: it’s a skull, it’s vintage Halloween, it makes noise, it holds candy–what more could I want, especially for a buck?

Let’s look at some of the features up close. 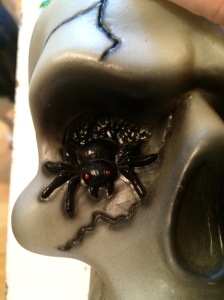 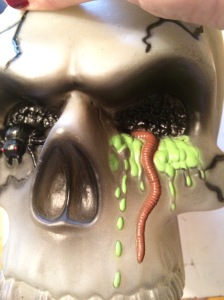 I’m not sure what condition would cause slime to leak out of your skull, but whatever it is, he has it. I think it’s what happens when you watched too much Nickelodeon in the ’80s. I don’t know. (Ha! Get it?) He also has a little of Halloween III: Season of the Witch going on, with the worm crawling out of his face. Happy, happy Halloween (Halloween, Halloween)! 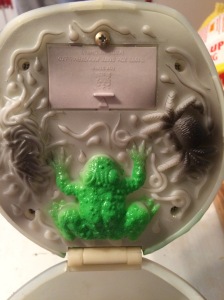 If we open his skull, we’ll see that he  has a lot on his mind. (Wocka wocka wocka!) He has another spider in there, some tiny snakes, some small shapes that are snake babies, tadpoles, or giant sperm. They could also be the living embodiment of commas and apostrophes. The best part is a bright green frog. Or toad. I don’t know my plastic amphibians as well as I should. 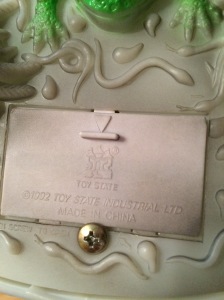 Here’s the battery cover. It’s nothing exciting, except it tells me that this beauty is from 1992 and was made by a company called Toy State. A quick Google search tells me that Toy State Industrial is still around and making mainly toy cars and trucks. It looks like they have always specialized in toys with lights and/or sound. When I searched “Toy State Industrial 1992,” most of the search results were about some magic Christmas train Toy State made that year. So apparently I’m the only one writing about the amazing plastic skull candy container.

Here’s the best part of it. Unlike those rude candy containers of today, you have to push a button to get the sound to work. I don’t know if that’s a good thing, now that I think about it, because you have to push the button before you open the container to retrieve your treat. Either way, it’s totally worth it.

It's a good time for Halloween flea market finds! I love this skull candy container. More on this beauty coming soon to my blog as part of Countdown to Halloween! Http://geekyvixen.wordpress.com

So how about you? What’s the coolest Halloween item you’ve found at a flea market or yard sale?