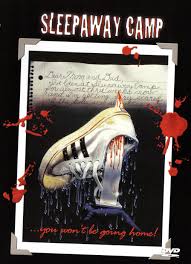 Whew! Talk about a cult classic. This movie is definitely one of the more memorable slasher flicks of the ’80s. It certainly boasts one of the most twisted endings to a movie I’ve ever seen, and it’s one that still surprises people today.

The story centers around Angela, a girl who lost her dad and sibling to a gruesome boating accident near a summer camp. She and her cousin are spending the summer at a sleepaway camp, and she’s having trouble adjusting. 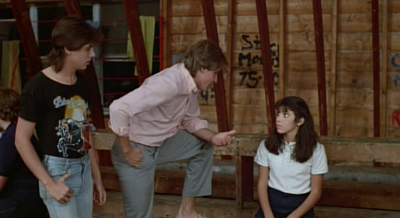 See that blank stare? She does that a lot.

The other campers, especially a few girls, are cruel to her because she doesn’t seem to want to participate in any activities. Her cousin whisks to her side to rescue her in most cases, and once she meets Paul, she starts to come out of her shell a bit.

In the meantime, people begin dying mysteriously. A pervy cook has gallons of boiling water poured on him. Campers go missing and are discovered, victims of violent deaths. Who could be doing all this?

SPOILERS BELOW, so if you haven’t seen the film and don’t want to know who the killer is, stop here. You can watch the film in its entirety here:

…Or if you want the Cliffs Notes version so you can keep reading, here’s a five-minute version:

Still here? OK, so of course, it’s fairly obvious Angela is the killer. (At least it’s obvious if you’ve ever watched any horror movie ever.) She’s really good at making mountains out of molehills, that’s for sure. I get why she kills Meg. That girl was unbelievably cruel to her, but some of the murders seem really extreme. Of course, that’s the point of the slasher flick, right?

The last minute or so of the film is undoubtedly one of the creepiest I’ve ever seen. Watching this again this past weekend, I was still a little shocked at what I saw, since it had been so long since the first time I watched it. The expression frozen on her face and that horrifying noise she makes make my skin crawl. This film is a cult classic, but in all honesty, Angela deserves to be in a place of honor with slashers like Jason and Michael Myers. She kills without mercy, and she’s as creative as those guys. She’s got mommy issues like Jason and Norman Bates, too, so she’s like a greatest hits of movie killers. (Well, in her case, it’s her mother figure, creepy Aunt Martha, but still.)

The film led to four sequels, the latest, Sleepaway Camp IV: The Survivor, released in 2012. I haven’t seen any of them, but after watching this one, I’m curious. I’m sure it’s like any other franchise–the first couple of movies are pretty good, but it goes downhill from there.

Between this and Friday the 13th, I’m glad I didn’t go to camp as a kid.

So how about you? Have you seen this movie or any of its sequels? Did the final scene give you the creeps? What’s up with Ronnie’s shorts?

Seriously. What is wrong with that guy? Those are not acceptable shorts to wear in the presence of children. Angela knows what’s up.