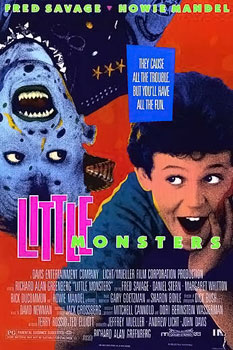 This time of year, many of my pals turn to The Monster Squad as the go-to monster movie for kids. I’ll admit, I didn’t see that one until my adulthood. (I don’t know how this happened. Maybe I was too obsessed with The Goonies to really absorb the awesomeness of all those monsters. Maybe I just missed it because I was too busy collecting Garbage Pail Kids and playing She-Ra.) I am, however, a fan of any movie that incorporates a plot led by kid protagonists that also has an adult twist. (And by adult twist, I mean that the kids curse and act simultaneously mature and immature.)

Little Monsters fills that hole well. In 1989, Fred Savage was having quite a year. (And since I was in looooove with him, I was, too.) His show, The Wonder Years, was well on its way, and The Wizard  was also released. (If you recall nothing else about that movie, you’ll remember the Nintendo Power Glove and Jenny Lewis, who grew up to be in Rilo Kiley and the coolest indie music chick ever.) For a movie that doesn’t really get a lot of love, Little Monsters has a decent cast: Fred Savage, his brother Ben (the Boy before he met the World), Howie Mandel, Frank Whaley, Daniel Stern (the narrator of The Wonder Years, among other things), Devin Ratray (Butch from Home Alone), and Rick Ducommun (one of the best “hey, it’s that guy” guys, known mainly for playing Art in The ‘Burbs). The girl in the movie, Amber Barretto, is most recognizable by me as one of the most prominent child models in ads that appeared in magazines like Barbie.

I loved this movie when I saw it as a kid. I even ordered the novelization out of the Weekly Reader. That’s how much I liked it–I asked my parents to give me money not only to see the movie, but also to spend on the novelization. I wish I still had that book, mainly because I’ve never seen it again. I mean, you don’t see a lot of novelizations anyway, sometimes, but one of Little Monsters has to be pretty random to find.

So if you’ve never seen it (which you can totally remedy on YouTube, by the way), the story centers around Brian Stevenson (Fred Savage) and his family, who have moved into a new house. His brother (Ben) is afraid of a monster under his bed, so Brian offers to sleep in his room to prove there’s no monster. Of course, there totally is, and his name is Maurice (Mandel). Maurice convinces Brian to accompany him to the monsters’ world, and Brian discovers that it’s a world of junk food, foul language, and destructive (but fun) mayhem. The more time Brian spends with Maurice, he realizes that the monsters cause mischief that gets kids in trouble. Not only that, but there are some not-so-cool adult monsters who want new recruits. And of course, this leads to an adventure for the kids.

It’s a typical kids’ movie of the era, in that it’s grouchy adults with real-world problems against kids who have their own problems that are just as important. It’s gross, it’s fun, and it’s a good addition to your Halloween viewing.

So how about it, gentle readers? Have you seen Little Monsters? Is it a movie you’ve revisited since 1989?