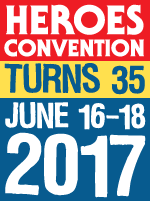 HeroesCon is turning 35 this year, and though it’s always the comics show to beat every year, Shelton Drum, Rico Renzi, Seth Peagler, and the rest of the gang are pulling out all the stops to make this an epic anniversary celebration. No doubt I’m excited to once again return to what my friends have deemed “Comics Summer Camp,” and I wanted to share with you, gentle readers, some of the highlights of the guest list. Since Wonder Woman is heading to theatres next week in her solo film (and I’m so excited I can scarcely think of much else), I thought it might be fun to do a preview of some of the guests with a Wonder Woman theme.

All images property of the artists and credited with links

I first discovered Jen Bartel’s work at HeroesCon in the past couple of years. I love her style and am a huge fan of her original work. (If you’ve seen her “Dead Men Don’t Catcall” image on t-shirts or tote bags or the enamel pins she’s sold in the past, you know why.) Her take on Wonder Woman is one I keep revisiting because it’s gorgeous. If you’re a fan of female empowerment in your comic art, she’s one you don’t want to miss.

You can find Jen online at her website, www.jenbartel.com and on various social media platforms.

Ben Caldwell’s version of Wonder Woman was a fun discovery as part of reading DC’s Wednesday Comics several years ago. If you recall, the comics were in newsprint form and featured a number of DC Comics characters. Caldwell’s Wondy was one aimed at a younger audience and was herself younger than the more-established Wonder Woman many of us are used to seeing. It was my favorite story arc in the series for sure. Since then Caldwell has illustrated Wonder Woman for young reader books and drawn at least one variant cover of her ongoing title prior to the recent relaunch.

You can find Ben at http://purgetheory.blogspot.com/ and on Twitter at @bencaldwellart.

I am most familiar with Alan Davis through his work on Batman and the Outsiders (my favorite comic from childhood), but he drew Wondy in an Elseworlds book called The Nail. I love his traditional take on her costume in this panel taken from the book. Though I love the modern take, any Wonder Woman costume with the eagle will always be my favorite. 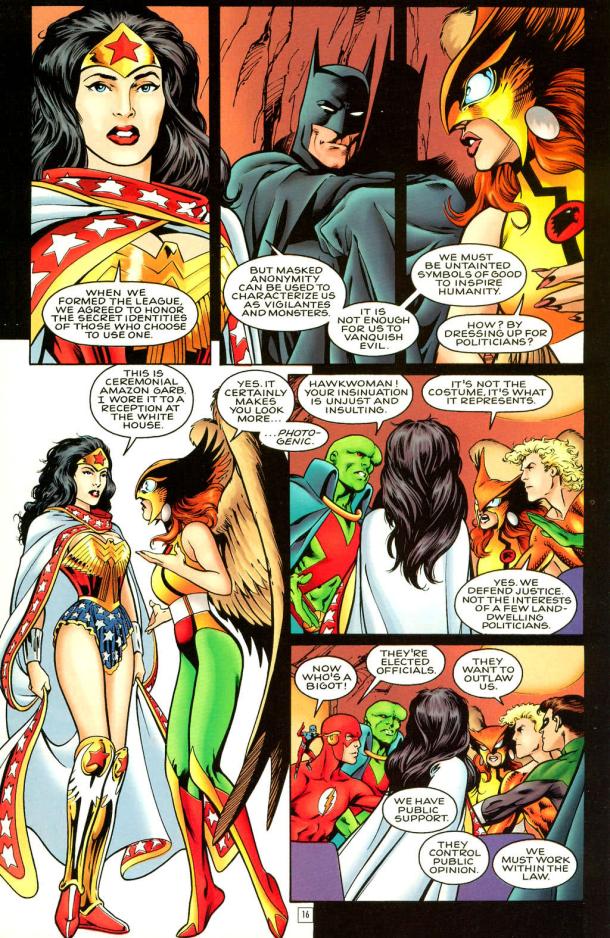 Image via The Nail

You can find Alan Davis at his official website, http://www.alandavis-comicart.com/.

Okay, I’m cheating here, but she’s a Wonder Woman in her own right. She’s a phenomenal storyteller, a smart and witty pillar of feminism in comics, and she’s delightful to talk to. Last year, at the fundraiser event the night before HeroesCon began, she talked to me and my friends for quite a while, even after I stumbled in my platform sandals and went to a knee holding two mugs of beer. (Incidentally, she was super nice and asked if I was okay, and everyone around was impressed that I didn’t spill a drop of beer in the process.) Even if you’re not familiar with her work–and if you’re not, get on that–go and say hi to her. She’s one of my favorite people in the whole wide world of comics.

She can be found online at http://kellysue.tumblr.com/ and on Twitter @kellysue.

Terry and Rachel Dodson were a big part of Wonder Woman, volume 3. If you’ll recall, this is the part right after the aftermath of her killing Max Lord and included an arc by Gail Simone. It certainly wasn’t my favorite run, but there were some bright moments (like the gang of white gorillas that hung out with Wondy). Terry Dodson’s interpretation of Wonder Woman was a lot of fun as well.

You can find Terry Dodson at http://terrydodsonart.com/.

There isn’t a piece of art that Francavilla has done that I don’t find breathtaking. Normally he’s more known for his work in monster/horror stories, but he did a cover for Sensation Comics #10. Sensation Comics was an anthology series that had different authors and artists teaming up to tell short stories in Wonder Woman’s adventures. I have a few issues because they include people I dig, and they range from the serious to the silly. I adore this image from the cover Francavilla did.

You can see more of Francavilla’s phenomenal work at http://www.francescofrancavilla.com/.

When I close my eyes and picture Wonder Woman, this gentleman’s version is the one I see. He created one of the most, if not the most, iconic versions of Wondy ever. Yes, Lynda Carter’s version is perhaps the first I saw, but García-López’s is the one that was on the Underoos package and on every toy I recall from my childhood, not to mention the comics I perused in the grocery store but for some reason never bought. (I blame my obsession with Betty and Veronica.) Being a child of the ’80s, I’m partial to this version and cling to every detail in my mind. I am beyond thrilled that I may have the opportunity to tell him myself how much he’s influenced my love of comics, and Wonder Woman especially. 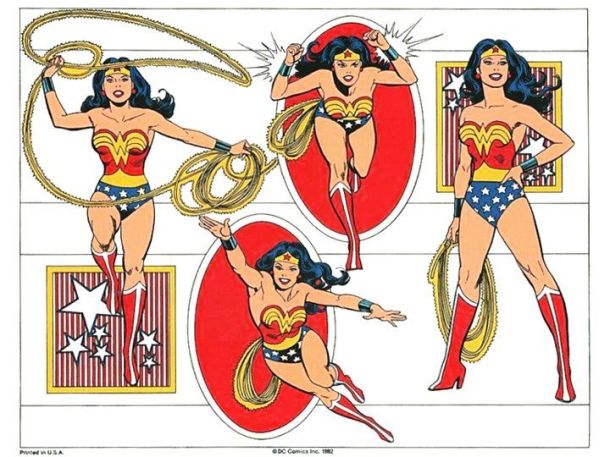 Image from the 1982 DC Comics Style Guide, via Pinterest

You can find him online at http://www.dccomics.com/talent/jose-luis-garcia-lopez.

Two of my favorite artists are Gilbert and Jaime Hernandez. They draw buxom, gorgeous women in their own Love and Rockets, but it’s always fun when they pop up in DC or Marvel comics and tackle my favorite ladies in those universes. I’m delighted that they’re returning for the show this year, as it’s always fun to talk to them. I love that though the images below are similar, the brothers’ distinctive styles shine through. The one thing about both that I love is how each conveys her strength. If you want to see more, Google offers a treasure trove of images of Wondy from both brothers. It was difficult to select just one from each! 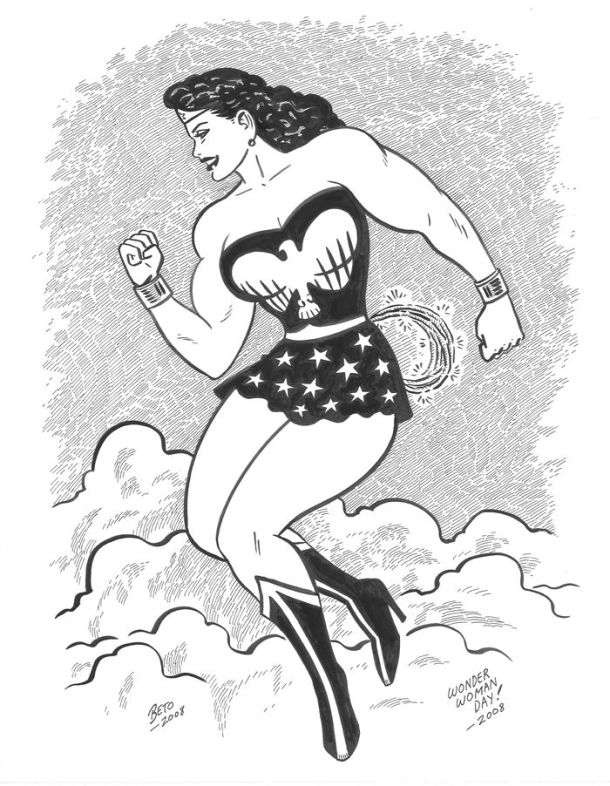 You can find Los Bros Hernandez on their Facebook page.

If you’ve followed me for long, you know that I’m a huge fan of Jim Mahfood’s frenetic graffiti-style art (and that I thoroughly embarrassed myself the first time I met him at HeroesCon). Jim’s a super nice guy and always fun to talk to at shows. He’s tackled Wonder Woman a few times, but this image is my favorite. I love the salty language and her tattoos.

You can find Jim Mahfood online at his website, https://www.jimmahfood.com/.

I am digging Quinones’ work on America from Marvel right now, but I found this image from Superman/Wonder Woman #21, and I love the juxtaposition of alter egos with the heroes’ costumes. Super cool!

You can find more of Joe Quinones’ art at his blog, http://joequinones.blogspot.com/.

My favorite of Jim Rugg’s work is his Street Angel, but I also dig another of his characters, Afrodisiac. This image is from 2011. He’s done a lot of work in recent years on ballpoint drawings that are astoundingly impressive. What I love about Rugg is his linework and his ability to work in a few different styles successfully.

You can see more of Jim Rugg’s work online at http://jimrugg.com.

I am mostly familiar with Sienkiewicz’s Marvel work. As a matter of fact, I picked up several of his Dazzler covers that I count among my favorite Bronze Age covers. In 2015, DC did movie homage covers, and he did this cool 300 tribute as part of that. 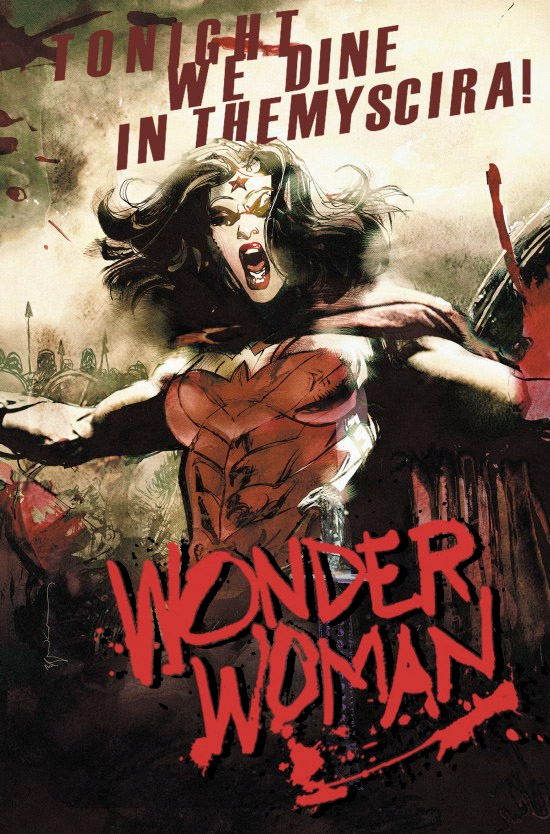 You can see more at the artist’s website, http://www.billsienkiewiczart.com/.

I love what Babs Tarr did for Batgirl and what she’s doing in Motor Crush. This variant cover for Justice League #39 captures Wonder Woman’s fierceness perfectly. It also puts Wondy at the forefront, where she belongs.

You can see more of Babs Tarr’s art at her website, http://babsbabsbabs.com/.

There is no image I’ve seen of Villalobos’ work that I haven’t loved. I adore the wrestling influences and his linework. This interpretation of Wonder Woman as a wrestler is one of my favorites from recent years.

You can see more of Villalobos’ work online at http://ramonvillalobos.tumblr.com/.

There are so many more artists I could showcase that are coming to the show, but this should be enough of an appetizer to have you scrambling to buy tickets! Seriously, this is one of the most affordable shows in the country, especially if you love comics. The show has an awesome energy and family vibe, and there are fun events like the art auction and Drink and Draw if you don’t want the fun to be over after the convention floor closes. Check out the full comics guest list here (including the always popular Indie Island), the artist’s alley offerings (including Battle Babies!) here, and grab tickets here. Hope to see you there!